Aleksander Dietrich uses uMake as a tool for analyzing automotive design. uMake makes it easy to build and analyze models quickly, anywhere you can take an iPad.

I started building cars in uMake because I wanted to improve my understanding of automotive proportions. Therefore I model existing cars which I like, and I then analyze their anatomy and the relationships between elements such as the headlights, the grill, etc. 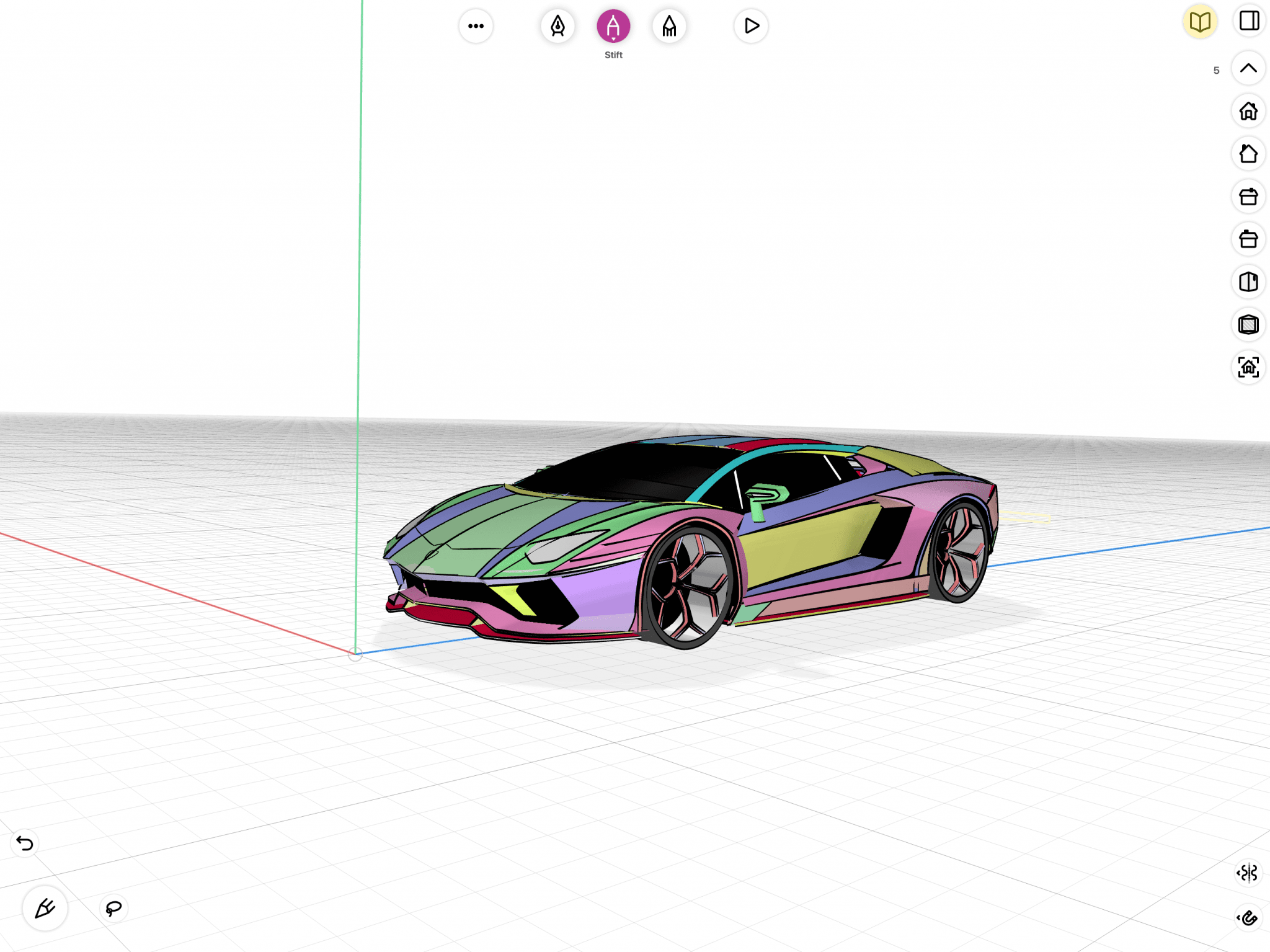 I decided to work with uMake because, for me, it’s more intuitive and easier to use than Alias, and I can work anywhere with my iPad. With uMake, it takes me only 3 to 4 hours to build a model of a car and then maybe an additional 2 to 3 hours to analyze everything that’s interesting to me.

I created everything in uMake using an iPad Pro and the Apple Pencil.

The biggest benefit of uMake for me is the speed of progress in building 3D models. For my purposes, such a model is enough to understand the proportions.

Because the workflow is so easy, I can quickly add anything that’s important, as I did in this example:

Here I’ve added some boxes around the headlight area to see its angles better. 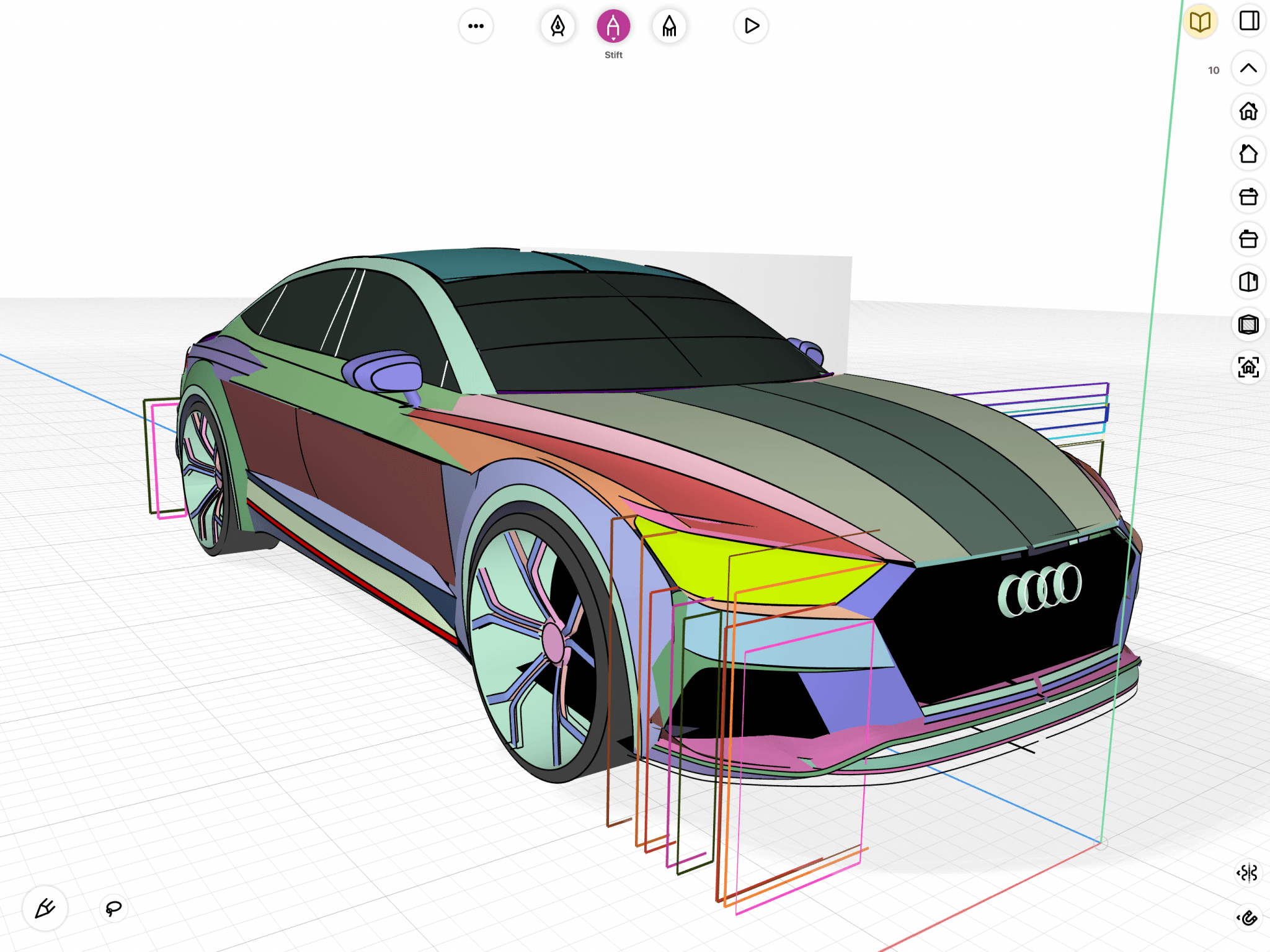 In this example, I added some section walls to the model to highlight the different directions of the surfaces:

I also recommend giving each surface and element a different color so that you can more easily distinguish all the pieces. Don’t use reflecting surfaces in such a rough model, because it will confuse your eye. Of course, a highly detailed model with class A surfacing would be better, but I don’t want to spend too much time on a 3D model. Besides, I’m not a professional 3D modeler, so if I want to see a class A model, then I simply go outside and observe cars in real life.

In this screenshot, I added some peak points to visualize the different dimensions of various elements. You can also see how far away each peak is from its neighbor peak points. 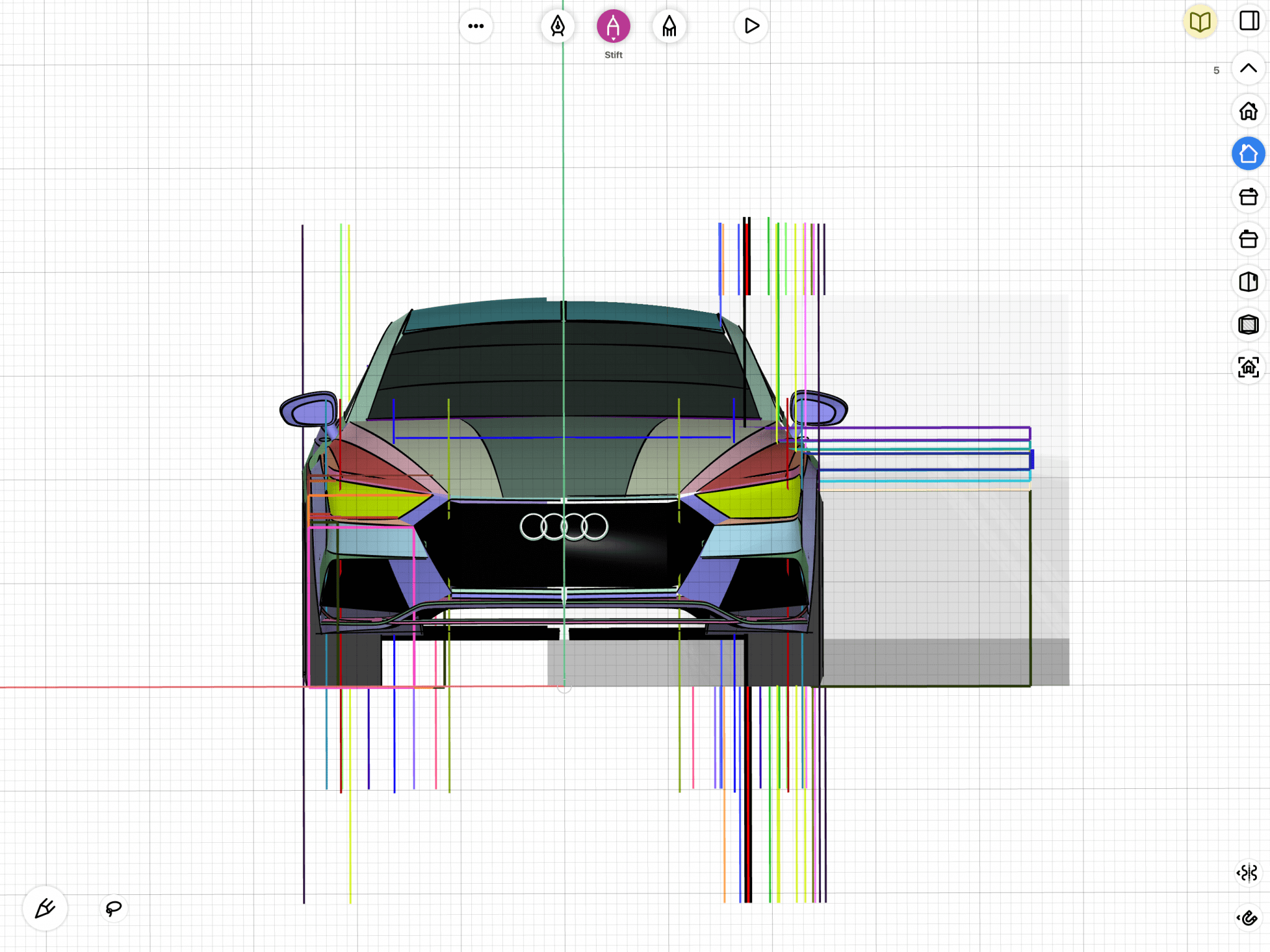 By switching off the surfaces, you’ll be able to see the anatomy of a car as never before. This can help you to understand three-dimensional objects better because it enables you to see what is going on in the invisible areas of an object.

This little analysis you see here is a reflection of what I see whenever I look at cars. I don’t see cars as just cars. For me, a car is a composition that contains elements, lines, sculpture, proportions, surfacing, and functionality.

This project was designed to build my knowledge of car design. All the different car models which I built ended up being something like a car design dictionary. Every time I sketch a car and realize that I’ve made a mistake, I can simply check how it looks like in 3D and correct myself. I also go for a walk. every day, just to observe cars. A habit of always observing helps me to remember more.

Yes, because I can take my iPad everywhere I want. I can work anywhere, and I’m no longer restricted to a PC. The mobile nature of the app also helps with short presentations. Instead of only showing some screenshots, I’m able to present a completed 3D model of my vision.

At the end of such an analysis, I gain a lot of new knowledge about car design and improve my skills in three-dimensional thinking. I also analyze other types of vehicles, from SUVs to mid-engined sports cars to concept cars that can not be found on the road. I add each new model to my group layer, where I compare each car with the other. And for every car you see here, there is also a proportion analysis like the one I did for the Audi A7.

I’ll continue to add new models to my library and new methods of analyzing vehicles. There is so much more than I don’t know now, but I want to know it all!

Since my project is less of a project and more of a study, my advice for anyone who is interested in car design is this: Build and draw existing cars. Do not design your own vehicles without knowing the rules of car design; otherwise, you will be teaching yourself the wrong things. Learn from the professionals — and by professionals, I mean existing cars from firms like Audi, Mercedes, Porsche, BMW — you name it, and also by studying good designers like Stephane Janin, Felix Godard, or Phillip Römers and others. Don’t look at cars like the Devil Sixteen or Lykan Hypersport, as these vehicles are poorly designed. In addition, go outside and observe closely how cars look in real life; this will help you a lot.

A great new feature for uMake would an options menu in which you can adjust the perspective of your model. Autodesk VRED is a good example: there you have a highly detailed menu just for the camera settings. The uMake version wouldn’t need to be as complicated as VRED’s, but just having some similar functions would be a great addition.