After seeking help for depression, artist Kiwi has found a unique and creative way to cope: creating 3D comics. This story will inspire you not only to be creative, but to imagine how creativity can change your life as well as the lives of others.

Ever since the first-generation iPad Pro came out in 2015, I’ve wanted to use it to create my own comic. Unfortunately, after buying the Apple Pencil, I discovered I was no artist. Also, I didn’t really have any ideas for a comic. It was only four years later, after seeking help for depression, that I had an idea for my comic. The idea for the main character, “Depressed Kiwi,” was easy enough as I’m from New Zealand and the Kiwi is our native bird. It also helps that they are super cute. 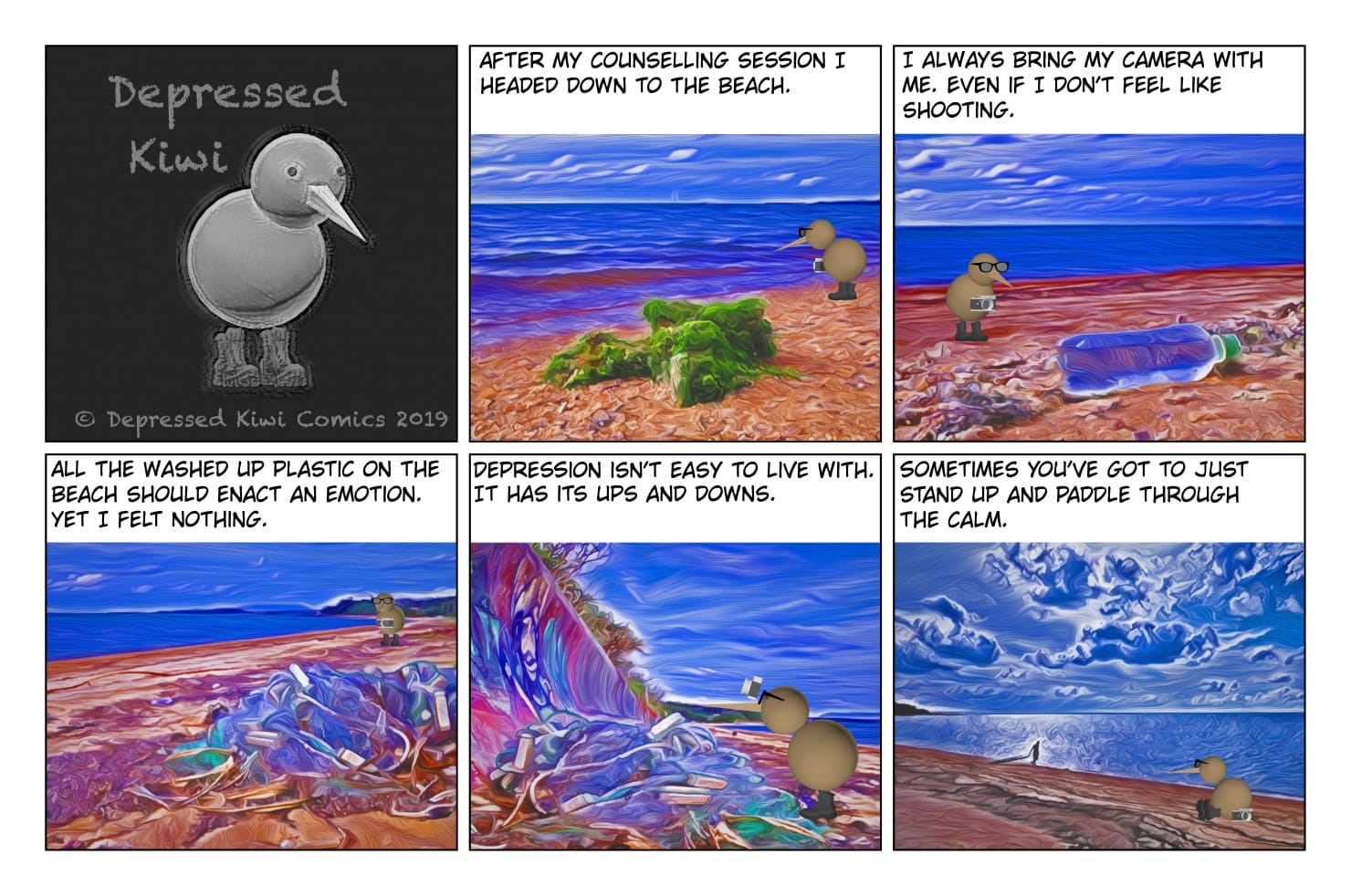 At the beach by Kiwi - comics made in uMake

With my comic idea underway, I still faced the issue of not being able to draw. I spent the last four years pursuing photography and decided to use my photos as the background for my comic. However, this still left the issue of somehow drawing my main character. I thought about buying the Apple Pencil again, but was worried that my drawings would still look terrible. Then, out of nowhere, the idea of using 3D models came to me. After that, it was just an issue of finding an application on the iPad that suited my needs.

Initially, I used an app called MediaBang to create panels for my comic, but I have since moved to Affinity Photo for its more advanced editing tools.

I then used ArtCard and BeCasso to apply filters to my photos to give the background a more desired cartoon look.

For the main character, I tried using the following 3D modeling programs: Shapr3D CAD modeling, Sketch 3D, OnShape 3D CAD, Morpholio Trace – Sketch CAD, and SketchUp Viewer, to name a few. Unfortunately, these didn’t meet my needs for various reasons. The main criteria were ease of use and the ability to export to full-screen photos.

Since this was my first time in the world of 3D modeling, I didn’t know what to expect or even know how to go about using the program. I found the in-app help guides and example models very useful to get started with. It was certainly challenging using curves and lines to start making 3D shapes.

Over the past six months of using uMake, there have been several updates that have made the overall use of this app easier for me, the latest being the use of favorites to store colors. This helps tremendously when dealing with different designs and trying to match colors previously used.

First, I used the Pages app to brainstorm ideas for a comic. Then I would separate the story into five panels.

Next comes the image part: thinking of photos to use and how to position my main character in them. Taking my photos, I would run them through an app called ArtCard or BeCasso to get a more cartoon look.

Using uMake, I would load the processed image into the background and position my 3D character accordingly. Depending on the scene, I would need to create some additional 3D objects (such as food, drink, and a table to put them on).

Once everything looked OK, I used the ‘save as photo’ option from the Export menu.

Next, I loaded up the exported photo into Affinity photo and placed it in its allocated panel.

After all five panels were filled, I would upload the finished comic via Safari.

Since I’m in Japan, I had the comic translated into Japanese with the help of my biggest fan, who uses the second main character “Akari chan” to tell her story.

I create on my iPad 90% of the time, and because of its portability, I carry it with me all the time. Having a 3D app on my iPad makes sense for me, and uMake fits that well.

My first comic was quite impressive, and I was encouraged to keep working on producing more.

I plan to continue making new comics each week, adding new characters and using uMake to its full potential. I’ll also be making 3D environments for my characters to interact with, to more easily tell their stories.

I’m hoping that if or when the comic becomes more popular, I can start making 3D printed characters from the comic.

Wouldn’t it be nice… by Kiwi - comics made in uMake

Patience. Make use of the help available, whether it be from the in-app help tutorial videos or the forums. I’ve found the support to be first-class.

When I first used uMake, I couldn’t do some of the things I can do now. I started off with a basic character made from 3D shapes (circles and triangles), and now I’m making more complex models. But I’ve still got a long way to go, as I’m a slow learner!

These will be different for each person using uMake, but for me, the following would be nice: